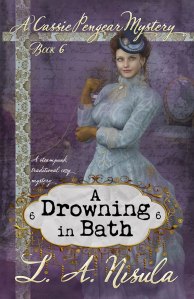 Here it is, the newest Cassie Pengear book  A Drowning in Bath.

Cassie Pengear had just solved a difficult case in London and was looking forward to a quiet holiday in Bath where she could relax, visit the Regency sights, and read Jane Austin novels. Her cousin Milly had very different ideas of a how to spend their holiday and convinced Cassie to try the mixed bathing at the hotel baths. While there, they witness one of the guests being murdered. With the police insisting it was nothing more than a tragic accident, if she wants to see the killer caught, Cassie has no choice but to try to solve A Drowning in Bath.

A few other notes.  I’m updating the formatting on some of the older books so they’re more consistent, so if you see something’s been updated, it’s cosmetic, nothing’s changed in the story.  The only one that will have a major difference is Killing at the Carnival.  I’ve added the first couple chapters of Death at Dinner as a sample to the end.  I’m not that fond of samples at the end myself since I’m not used to guessing when a book will end on my e-readers, but I’ve had several people tell me they like it, so I’m trying it.

And there’ll be something else later in the week, but I’ll save it for then.

Other ways to find out about new releases